Florida’s massive swampy region is home to some of the state’s most iconic animals. Alligators, crocodiles, and flamingoes are just some of the few animals that residents and even tourists are familiar with. But less acknowledged than these animals are the countless small insects and bugs that live in the Everglades. There are numerous species that we could list here but these are the ones that you are likely to see the most during airboat rides Everglades West Palm Beach. 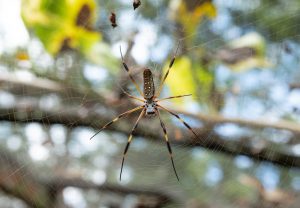 These bugs are actually occurrent throughout most of South Florida and don’t just reside in the Everglades. In fact, if you live in South Florida, you may have likely come across these critters more than once in your backyard. Golden Orb Spiders are given their name due to their silk appearing as gold when reflected in the sun. They are also known by local residents as Banana Spiders. Their colorful appearance, like most other animals, serves as a warning sign to predators of their venom. If you ever see one, try to avoid it. These peaceful critters will attack only if you disturb their dwelling and when threatened, they can deliver a powerful and potentially deadly bite. A bite from a Golden Orb Spider can cause blisters, redness, and pain. If allergic to the venom, victims can expect respiratory problems and muscle cramps. 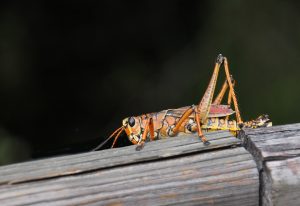 Much like the Golden Orb Spider, these bugs’ colorful exterior serves as a warning to predators. But don’t worry about coming into contact with them, they’re not deadly (so long as you don’t eat them). Unlike the typical, small, green grasshoppers that you might commonly know, the lubber grasshopper is much larger (roughly 3 ½” in length). They also can’t fly but can walk and jump. These Everglades insects are slow so when you see them, take your time to get your camera out. Odds are, you can get multiple pictures before these small critters scurry away.

One of the most versatile insects to exist in the animal kingdom. Whirligig Beetles can fly, swim, and dive into water. While hunting for food or looking out for danger they can see both above and below water due to their divided eyes. They’re usually easy to spot as they travel in groups across the waters of the Everglades. The reason why they are able to travel underwater is because of their ability to contain an air bubble underneath their abdomen, which functions as a lung. They consume fallen insects or mosquito larvae when traversing through the water.

Though similar in appearance, the Island Apple Snail is much larger in comparison to the Florida Apple Snail (growing roughly to the size of a tennis ball). These snails pose a threat to the swampy ecosystem since they deplete the food source for other animals, namely the Snail Kite. Because they consume Florida Apple Snails, there is less food for the Snail Kite to have for itself resulting in the bird’s declining numbers. Also, because of their dense shells, it can be difficult for these birds to eat these invasive species.

No official name is given to these little critters and in place are given nicknames. Bromeliad Beetle and Mexican Weevil are a couple of examples. But they are most commonly referred to as Evil Weevils by bromeliad enthusiasts. They cause destructive damage to the Everglades’ ecosystem as they prey on bromeliad trees.

Though the heaviest infestation of these bugs remains in Broward County, some of them have found their way into the Everglades. Originally from Sri Lanka and India, they were first founded in Broward County in 1999. The danger these creatures pose is that they destroy a variety of trees and shrubs that grow in the Everglades such as the wax myrtle, strangler fig, and cocoplum. They can be easily spotted as they congregate in groups and are usually recognized by the sooty black mold they coat themselves with and on their victims. 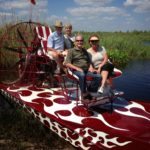 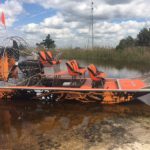 Everglades airboat rides - the fun of riding an airboat 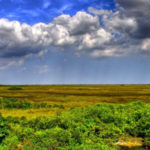 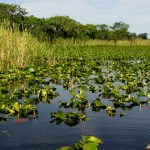 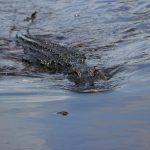